The new enigmatic I-Pace is Jaguar’s first pure-electric model and the latest addition to the company’s expanding crossover lineup. Specific details about the new Jaguar I-Pace are still mostly unknown, the dramatic design and unique packaging are obvious. Jaguar promises more than 200 miles of range from its 90.0-kWh battery. It will be powered by front and rear electric motors making a combined 400 hp and 516 lb-ft of torque with all-wheel drive.

Most of the stats that Jaguar would discuss were lifted directly from the concept version shown a year ago. They are tight lipped regarding final specs, how much it will cost, how quickly it will charge, and whether Jaguar will be making any infrastructure investments like Tesla. We know that Jaguar is employing an outside supplied for its batteries. Given the Panasonic- Jaguar partnership in the Formula E electric racing series, we could suspect it will be Panasonic. 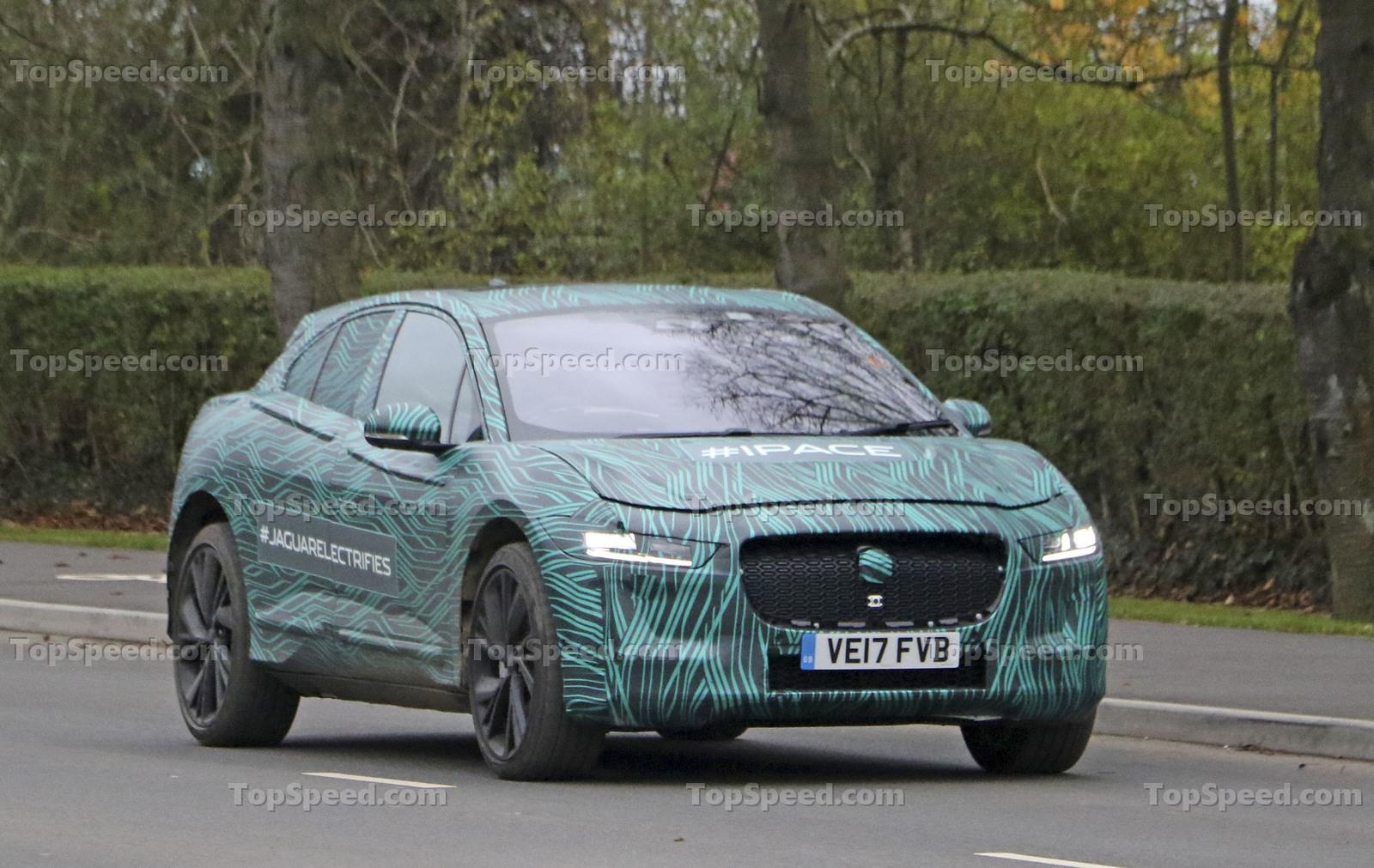 But in contrast with this, the two identical electric motors that move the I-Pace were designed in-house. One of them in located up front and the other at the rear, each independently driving an axle. Together they provide an all-wheel drive with a default 50/50 front-to-rear torque split that can be altered to adapt to slippery conditions. The name that comes with I-Pace instead of E-peace is due to the fact that Jaguar Formula E race is called the I-type. This way the brand’s electric vehicles will get the letter I instead of the letter E.

The new 2019 Jaguar I-Pace is almost ready to step into the spotlight. It is expected to hit the market and go on sale in fall or latest the end of 2018. As for the price, since it’s a premium vehicle, we expect it to be close the $100,000. For sure not anyone would buy this new I-Pace, but for luxury EV buyers this will be a decent alternative.

The I-Pace has an interesting vent in the hood that allows air to pass over the exist of the radiators and help extract heat while also improving aerodynamics. According to Jaguar a 0.29 coefficient is claimed. The reason why an electric vehicle has a radiator is the EV’s battery needs to be cooled to remain in its optimal operating-temperature range, as they can generate a lot of heat when they’re being charged or quickly discharged. Jaguar’s solution in this case is liquid cooling via coolant, a radiator and a circulating pump. 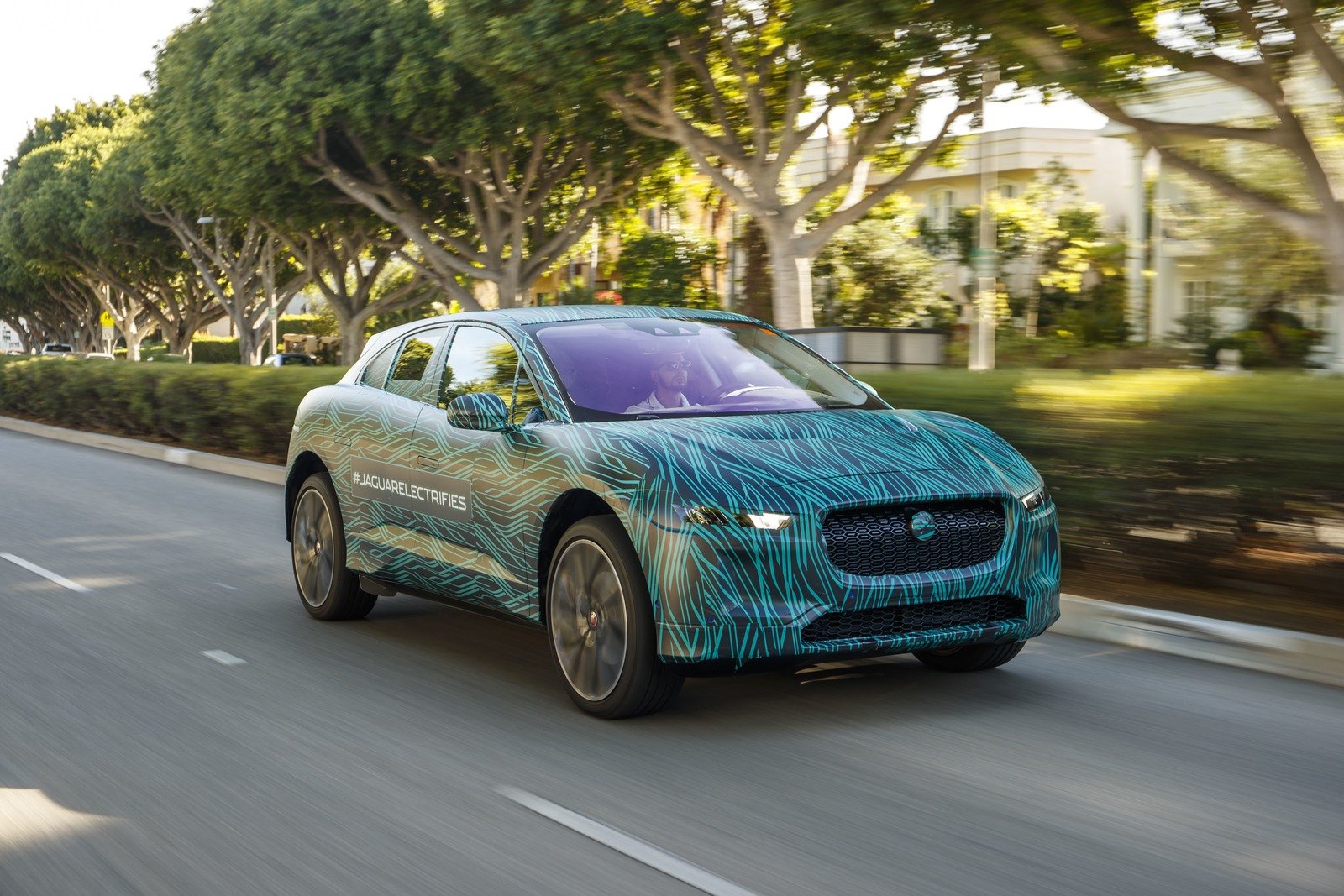 During decelerating and recharging its battery via regenerative braking the sound became particularly loud in the prototype. However Jaguar tells us that the production version might be quieter. The regenerative braking has two selectable models available. The first one, which is more conventional and requires that you use the brake pedal more often and the second one, which is more aggressive and allows you to drive using only the accelerator.

When it comes to the interior the seats are comfortable and there is a decent amount of rear sear space, similar to what you might find in Jaguar’s mid -size F-Pace crossover. It also has a touchscreen that appears to be shared with the rest of the Jaguar’s lineup. 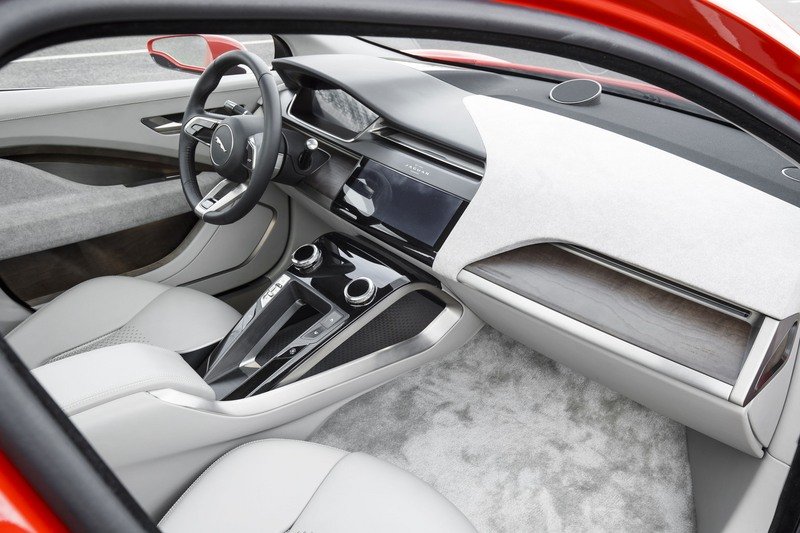 The regenerative braking has two selectable models available. The first one, which is more conventional and requires that you use the brake pedal more often and the second one, which is more aggressive and allows you to drive using only the accelerator.

Under the hood, as we said before, the car has two identical motors, one in the front and the other one in the rear. Each motor is good for 200 horsepower and 258 lb-ft of torque, for totals of 400 horses and 516 lb-ft. The power hits right away having a quick acceleration. Jaguar claimed a zero to 60 mph time of 4.0 seconds when the concept was unveiled and we have no reason to doubt that time. Considering it’ll be smaller than a Tesla Model X, these specs should prove enough to give it decent performance.