Thinking that it must be an easy job being a premium badge on US shores is just wishful thinking. More welcoming posture toward new labels and relative lack of prejudices against the shortage of heritage, compared to the old continent’s state of mind, sometimes work in your favor, sometimes don’t. Mercedes, BMW, and especially Audi pull significantly less than half of their European sales figures from this side of the pond, which certainly gave breathing ground to Lexus, Infiniti, and Acura. Still, absence in American market of strong patriotism infiltrating every automotive purchase, which is especially perceivable in Germany, caused domestic brands like Cadillac or Lincoln to plummet easily. How’s that working out for Genesis then?

After extremely ungainly and clumsy start, and after we had Hyundai, Genesis and Equus badges on what are supposed to be Genesis models, it seems that Hyundai’s luxury division finally sees its path more clearly. Sales figures circling around 30k annually for a fresh luxury label are pretty decent but they are not moving anywhere for some time.

They even dropped last year. While we all wait for Koreans to pull a natural and logical move and introduce modern “hot cakes”, read crossovers, we were treated with something different. 2018 Genesis G70 arrives to complete sedan lineup and try its luck in the cramped entry-level luxury sedan segment.

Everything that we saw so far Genesis appeared visually bulky and cumbersome, save for the discontinued coupe which wore Hyundai’s designation anyway. That doesn’t come as necessarily bad as G80 and G90 leave some imposing statements while on the road and their favoring of luxury and comfort over athleticism complement the intended picture. Yet, we don’t know if it is possible to craft a little sedan appearing as brawny, and we are not going to find out that now, as G70 picks leaner approach. 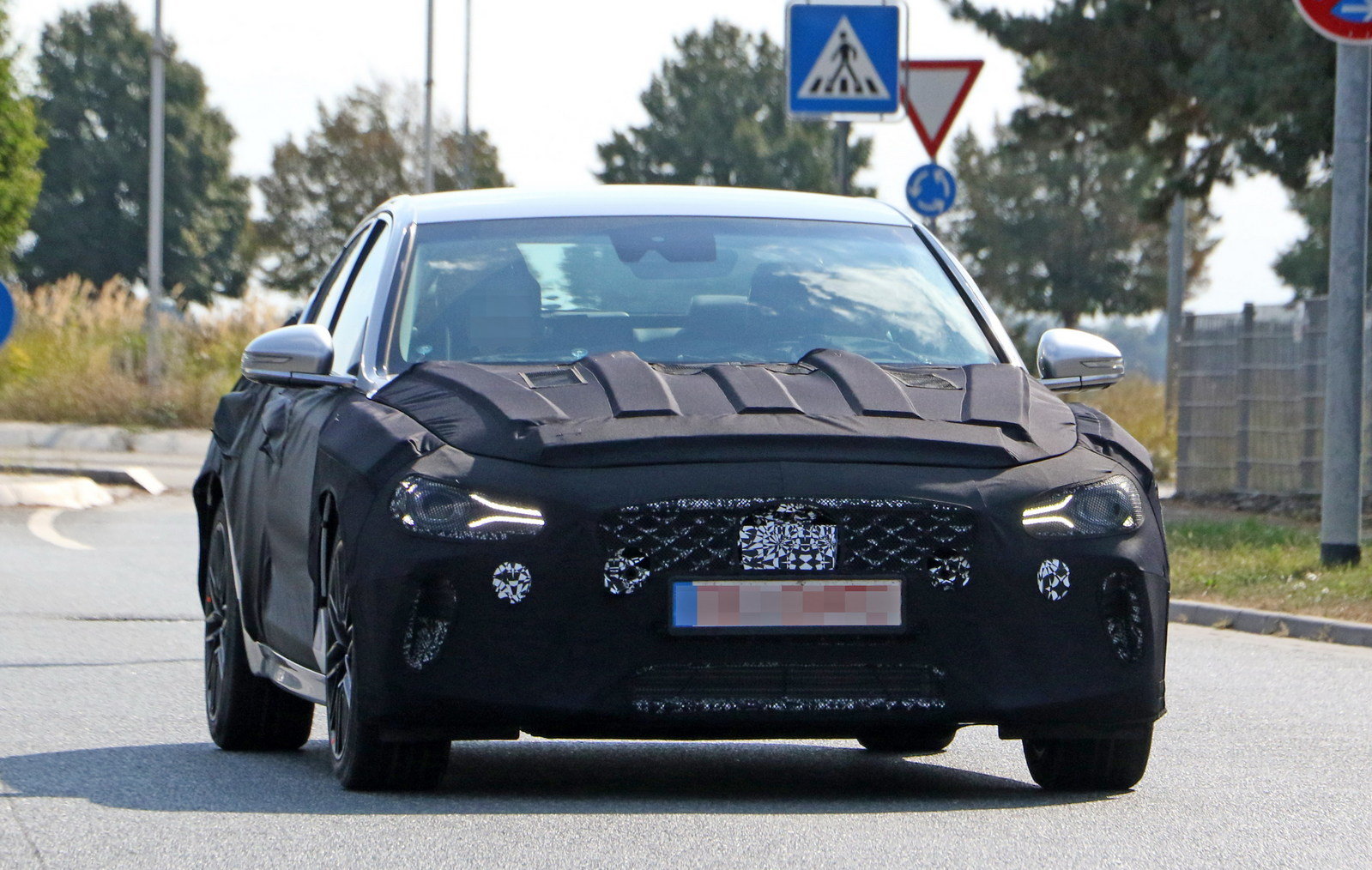 It resembles a bit Maserati’s Ghibli from the upper segment, but not much, and it doesn’t reach those levels of handsomeness. Still, it looks decent enough. Dynamically creased hood, perching grille, large side vents, aggressive front bumper and big rear diffuser try to justify sports sedan moniker, but they don’t go overboard, not even nearly. The whole deal is still partially reserved but also refined. Last said is achieved by sleek headlights following the natural flow of the nose and beautifully sculpture tail. It doesn’t set the bar in the segment surely, but it is the best thing so far from the young luxury brand.

Design wise cabin is simple, elegant and refined. Here emphasize on sportiness is full. Dash is driver-oriented and not overpopulated with buttons, you can opt for diamond shaped contrast stitching for seats and doors, and you can’t choose wood veneers, just aluminum ones even with beige upholstery. 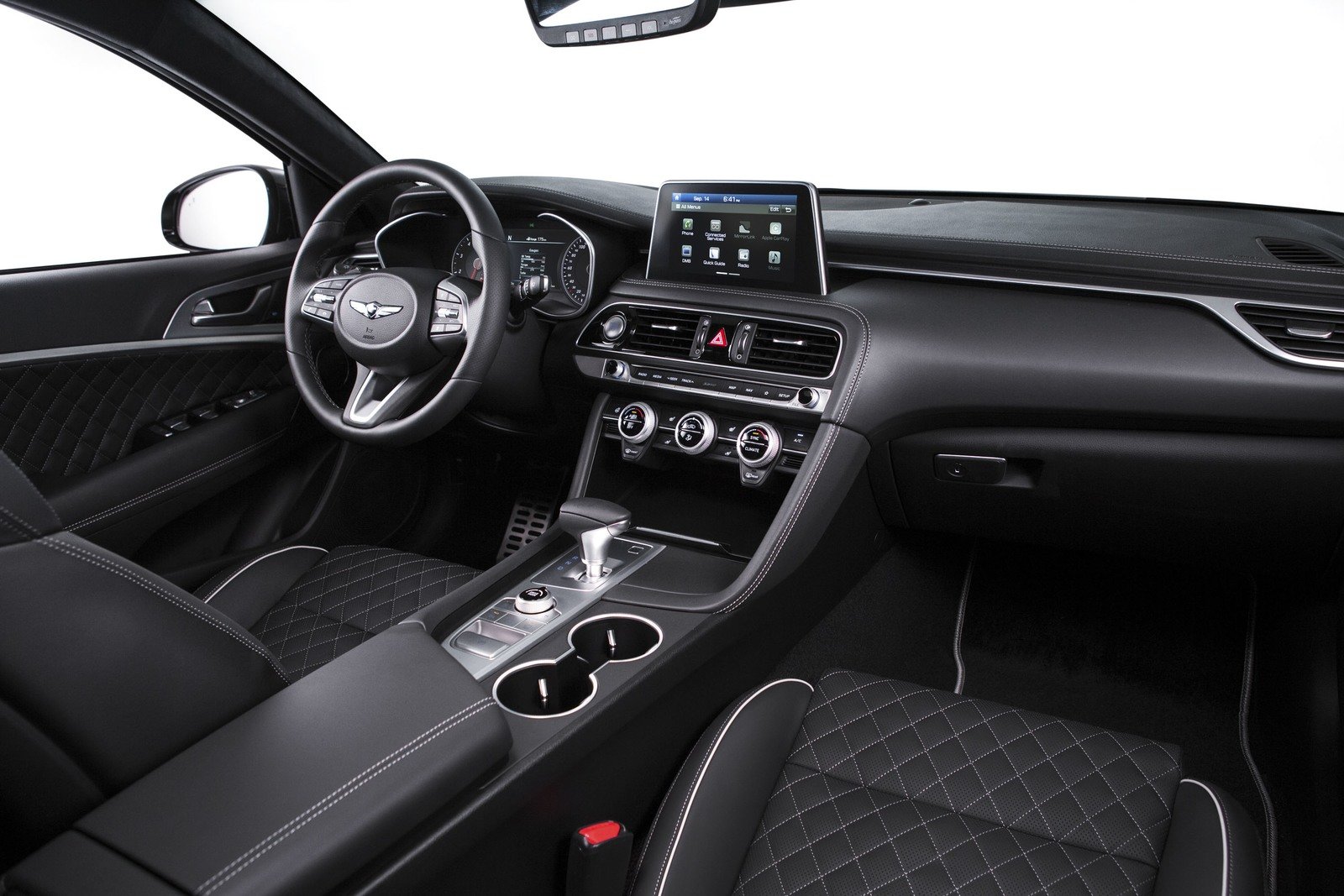 While Kia’s Stinger chose more visual flair, this Genesis resorted more to high-quality materials, which also comes as mandatory giving premium aspirations. Infotainment screen sits a top of the dash and it doesn’t move anywhere, but it supports Apple CarPlay and Android Auto. As for wheelbase, it is identical to the one from Merc’s C-Class and space at the back is a bit tight as it is in mentioned German.

Choice of engines falls on, new to the brand, turbocharged 2.0-liter L4 delivering 252 hp and 260 lb-ft of torque, and already present twin-turbo 3.3-liter V6 boosting 365 horsepower and 376 lb-ft. Koreans claim that with V6 G70 rush to 60 mph in 4.7 seconds which is a competitive figure. And then we come to the bunch of gizmos related to the driving joy. AWD is optional and it 100% favors rear wheels, brand’s standard 8-speed automatic is specially tuned for this model, there is a possibility of manual shifter option, dampers are of adaptive nature, it features brake-based torque vectoring, rear LSD and even launch control. So, on the paper everything looks promising, and let’s hope that once on the pavement it doesn’t disappoint, giving that Genesis was never skillful with curve handling so far. 2018 Genesis G70 arrives in the US early next year with estimated price in low thirties when we should be able to provide more comprehensive verdict for it.