Toyota Sequoia shares its name with a tree and for a reason. That exact vegetation specimen can grow up to 300 feet, weigh 200 tons and live up to 3000 years. Ok, Toyota’s product doesn’t share same figures, but 205 inches of length, almost 6000 pounds of mass, and decade-old lifespan surely justify chosen moniker indicative of that particular plant. Still, SUV in question is classic American-style, full-size, body on frame SUV, so we have to admit that we saw lengthier and heavier numerals. But we can’t seem to find as similar lifetime since new Expedition arrived, and that was the worst aspect of the tree in question that this Toyota could pick up.

So, after a decade Japanese decided to perform a nip and tuck, thinking that it should be enough? Well, it isn’t. Before this facelift Sequoia visually appeared ancient against rivals, while now it will just look dated. Japanese aspirations should strive higher than that. We are treated with a new shape of headlights also featuring full LED treatment, a new design of the grille, smoked tail lights, and minor tweaks to the front bumper. Sorry Toyota, but your product will remain least attractive in the class with or without this minor botox injection. 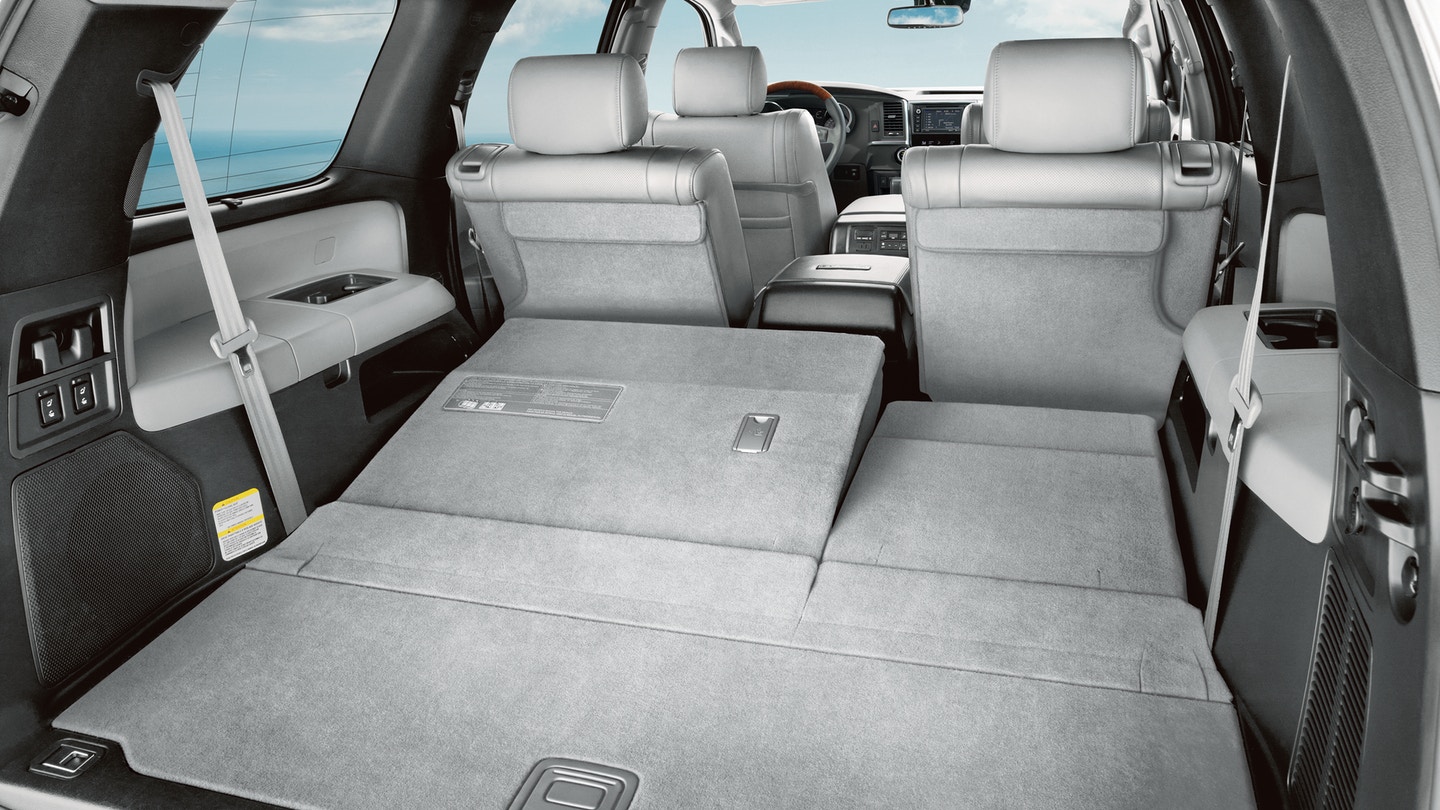 Interior story is no better one either. It was granted with new instrument cluster and pretty much whole innovation stopped there. Design of the cabin appear old as much as it is, quality of the used plastic is simply horrendous and level of fit and finish doesn’t alleviate anything of the previous sorrows.

IT’S NOT GETTING ANY BETTER

If Sequoia turned out to be deficient in the styling department, how does it perform in the specs one? Not much better. There is only one engine, 5.7-liter naturally aspirated V8 pumping out 381 hp and 401 lb-ft of torque, still using port injection, and sending power through 6-speed automatic to the rear axle or to the both of them. 0-60 mph takes 6.7 seconds, which manages to beat Tahoe and Yukon, but only if they don’t arrive with their beefier V8s, while fuel efficiency with 13/17 mpg (city/highway) is dead worst in the segment. Is there anything good about this behemoth, then?

LIGHT AT THE END OF THE TUNNEL

In fact, there is. The cabin is enormous. But not in a general way, as it is in all these “Goliaths”, rather also when compared to the competition. In its best scenario (all seats folded) it can swallow 120 cu ft worth of stuff, for which to surpass you need Yukon XL or Suburban and they barely manage to do so. As part of brand’s newest politics, 2018 Toyota Sequoia gets as standard Toyota Safety Sense-P package which includes adaptive cruise control with pedestrian detection, lane-departure alert, and automatic high-beams. 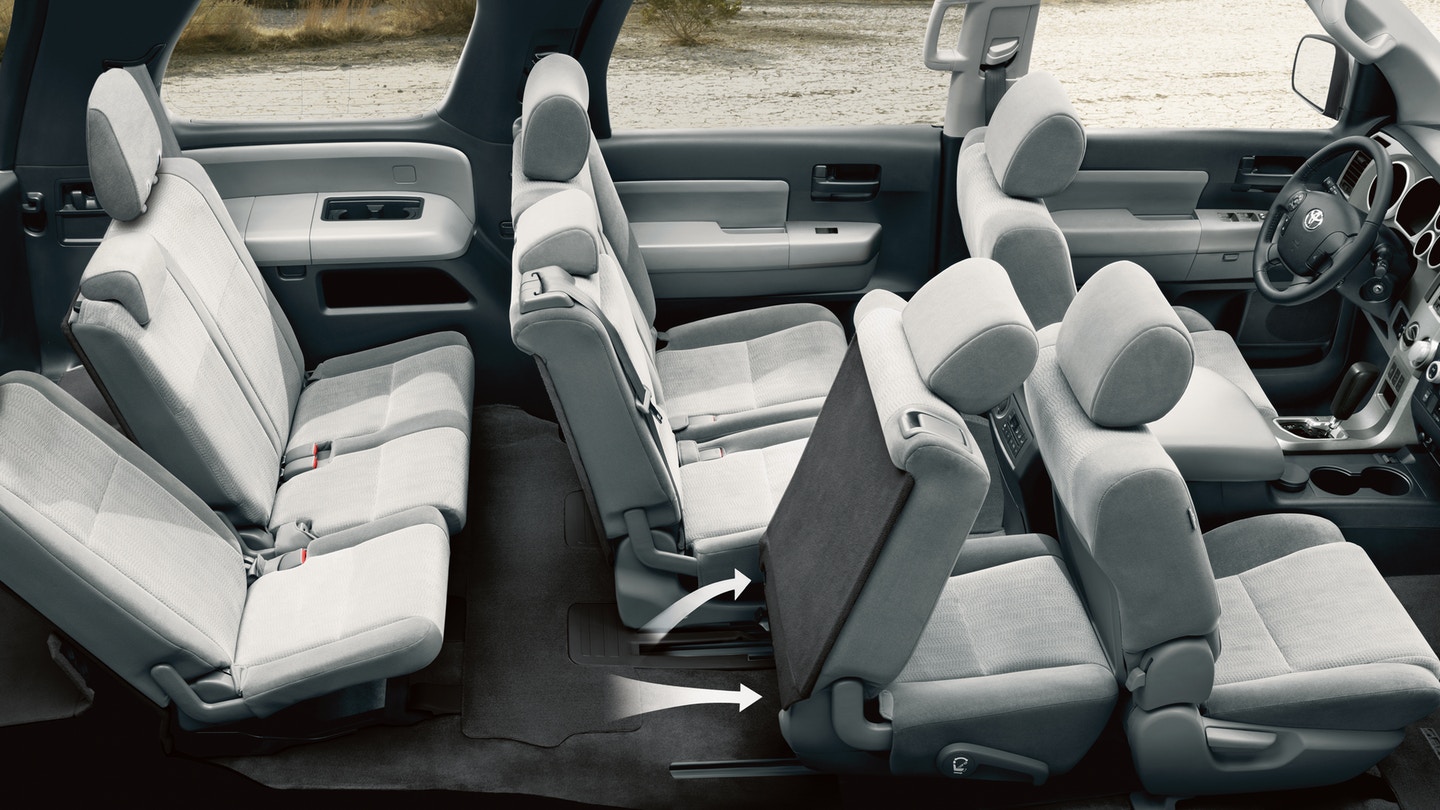 Also, Japanese spiced things up a bit with this refresh by introducing TRD Sport model, which is not as much as TRD Pro, but still an interesting deal. Besides some visual makeup as gloss black paint for mirrors, grille, and alloys, Sport model also arrives with Bilstein dampers and TRD anti-roll bars on both sides, which won’t turn it into an off-road beast, but it will improve not so perfect manners on the paved surfaces.

JUST NOT ENOUGH OF THE LIGHT THERE

Besides mentioned good stuff, much of it arrived with updated 2018 Toyota Sequoia, all bad what was stated is just overwhelming for it. This tree inspired enormous box on wheels should have thrown a white towel some time ago, and we should have witnessed brand new model by now. In that sense, the initial amount of cash in size of $48,300 needed for it, is better spent if it goes on any of its rivals. The majority apparently agrees with that, as with its sales figures it is dead last in something once again.