Mercedes decided to visit lower shelves of the automotive world in 1997 by introducing compact A-Class. While A-Class had pretty rough beginnings, by the time when B-Class was introduced in 2005, Merc was already more skillful with small cars and this compact MPV hasn’t rolled over its posher image. The current generation is the second one and it was introduced in 2011, and as Stuttgart doesn’t hesitate much with replacements 2019 Mercedes B-Class is on the way. Note, to the Americans where B-Class is offered only in EV form, the new one won’t come there in either form. Good! It was created anyway, just to please pesky California, and dismal driving range of 87 miles is an indicator how much effort Germans invested in it.

Spy shots of test mules roaming public streets are available, but so are some depicting a parked specimen without camouflage, but partially hidden behind car cover and missing some body panels. Still, that is enough for us to see a slimmer shape of headlights, but when compared to the A-Class and CLA-Class test mules they are rather gently rounded then aggressively sharpened. 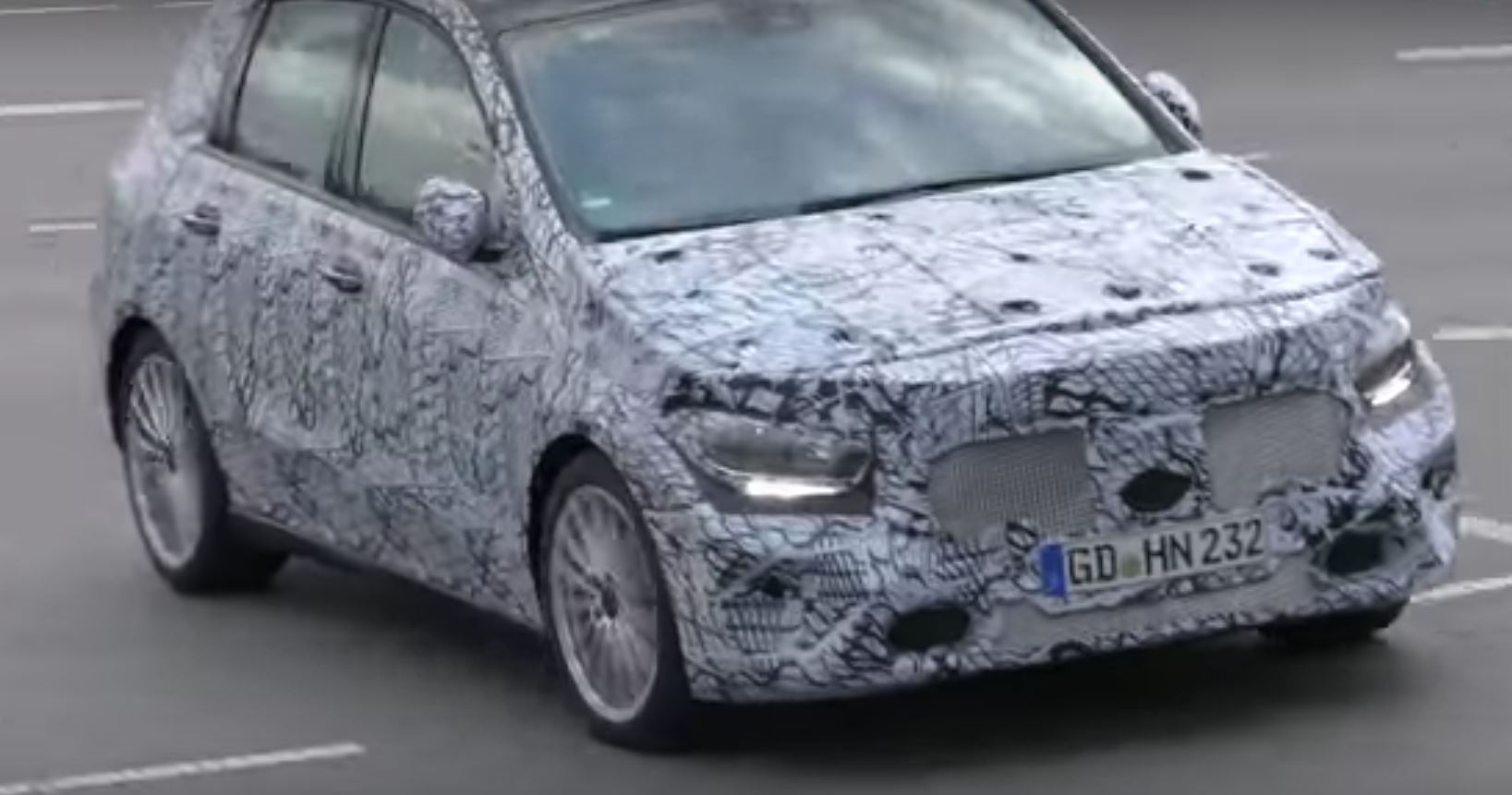 Side profile also lost the majority of dynamic carvings, becoming significantly smoother, which is evidently new brand’s trend introduced by E-Class Coupe, and destined to be followed by this minivan, along with A-Class and its derivations and also by new CLS-Class judging by spy photos. No shots of the interior for now, but if B-Class still intends to arrive with one presenting a variation of future A-Class approach, then expect a large and horizontal chunk of glass housing two screens as done with available E and S-Class.

Upcoming B-Class will use an updated version of MFA platform dubbed MFA2, which is Merc’s medicine for small FWD cars. The new architecture should bring some weight savings and it comes as ready for alternative powertrains (read hybrids, probably plug-in one). 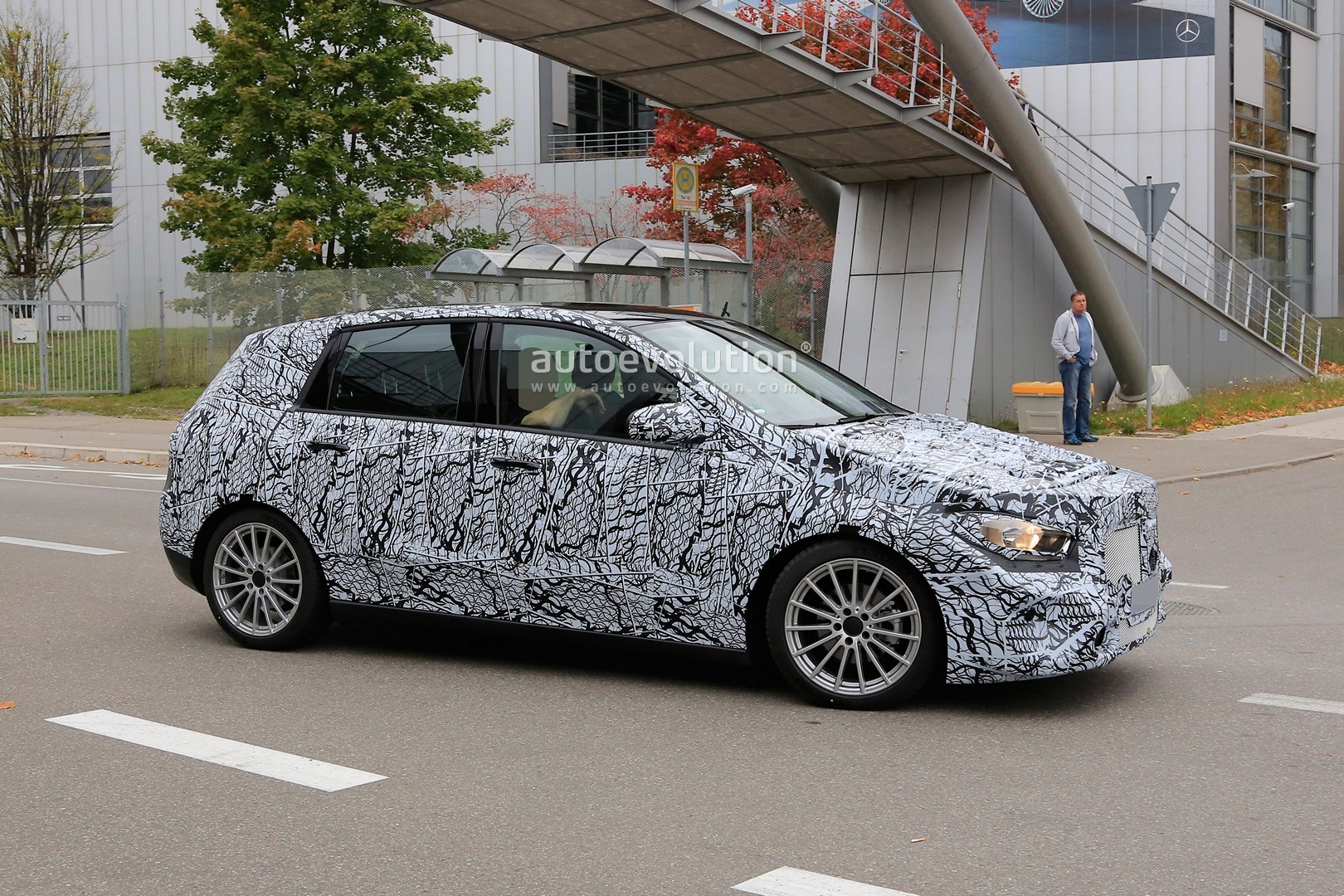 Current B-Class’s engine lineup is vast in Europe, offering several diesel units ranging in power from 90 hp to 177 hp, more than few kinds of petrol ones boosting from 122 hp to 211 hp and even one natural gas engine. The new generation will certainly reshuffle power and efficiency figures of mentioned mills, presumably in a positive way. The old continent will, as usual, have manual shifter at disposal, while current 7-speed automatic might as well follow through as new 9-speed one is only for marque’s RWD vehicles for now.

WORTH OF WAITING FOR?

Brand new B-Class could debut in 2019, or maybe even close to the end of 2018. With a premium price tag of £23k ($30k) in the UK, it has just one or many (many) rivals. Actually, it has one direct opponent which is BMW 2 Series Gran Tourer, while all others are mainstream alternatives with less posh badges. B-Class pricing seats just in the middle between same-sized compact MPVs (Ford C-Max, Kia Carens, Renault Scenic, Citroen C4 Picasso…) or considerably larger full-size ones (Seat Alhambra, Ford S-Max, VW Sharan, Renault Espace…). Whether sophistication brought by luxury label (in case of a minivan) is enough to sway you from monetary savings achieved with more mundane badges or from all benefits hidden in one class above, is up to you, which also determines whether 2019 Mercedes B-Class is worth of waiting for.