Mercedes released the AMG GT back in 2014 and they didn’t really change much about the car. However, they did release special editions as the time went by and it looks like they are not done just yet. Not that long ago the manufacturer released the 2019 Mercedes-AMG GT4. Despite what some of the older rumors were saying, the GT4 is not a four-door super-coupe. Instead, it is basically the race-ready version of the regular AMG GT. This means it comes with quite a few upgrades meant to make it faster and safer. This also means the car is no longer compliant with all the usual road regulations which may pose a problem for some.

The GT4 is meant for AMG’s clients that are looking to race. The car comes ready for the GT4 FIA championship, so every part has been thoroughly tested in order to withstand racing conditions. While there are some improvements over the base model, they also tried to offer a really reliable experience. This means the GT4 comes with larger and easier to service brakes than the regular car. 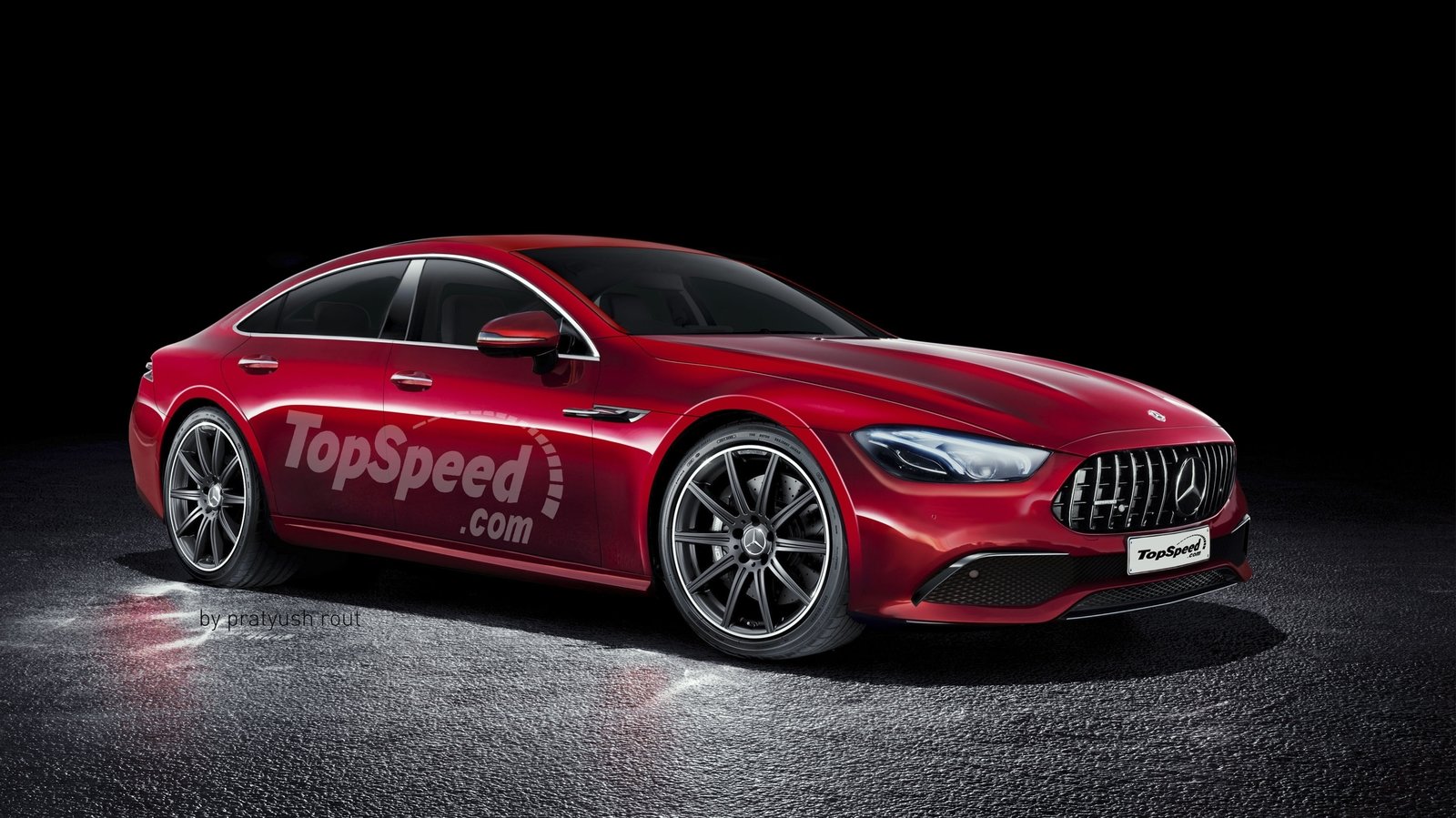 It also brings some interesting features into the mix such as air-jacks as well as a different running gear. This includes a KW-supplied suspension setup which can be fully adjusted by the driver. Not only that, but the car also features lighter weight wheels, different control arms and a stiffened chassis with the sole purpose of making it faster than otherwise.

Even though they showcased the car a short while ago, the 2019 Mercedes-AMG GT4 is already available for sale. The car costs $239,000 which is quite a bit of money for a sports car. However, as a race-car, the GT4 is one of the more affordable vehicles out there. On top of that, Mercedes did their best in order to come up with a really complete experience, so the running costs for the GT4 are actually smaller than one would expect.

While most racers don’t really car about how their cars look like, the 2019 Mercedes-AMG GT4 does have a rather interesting look. The car is mostly based on the production GT R, so it features the same grille with the vertical slats, the swept-back headlights and the really low and slung body. 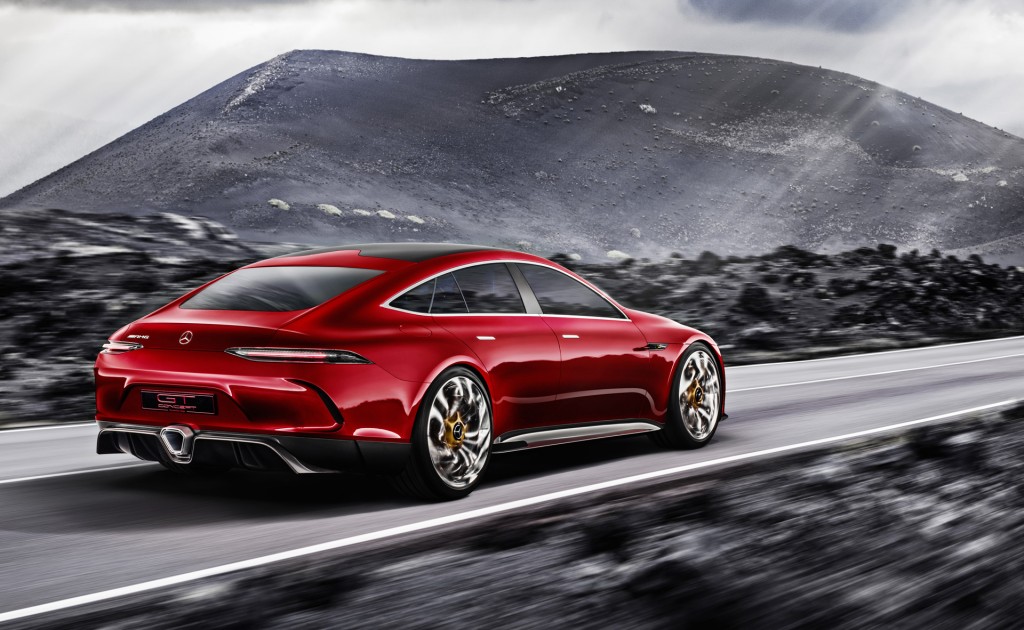 Over the road car, the GT4 comes with a bespoke front bumper sporting a massive splitter, different intakes, larger fog-lamps as well as a new hood. There is also a massive rear fixed wing, a larger diffuser as well as new exhaust pipes. All of these changes aren’t really cosmetic but more performance oriented in order to make the AMG GT as fast as possible. 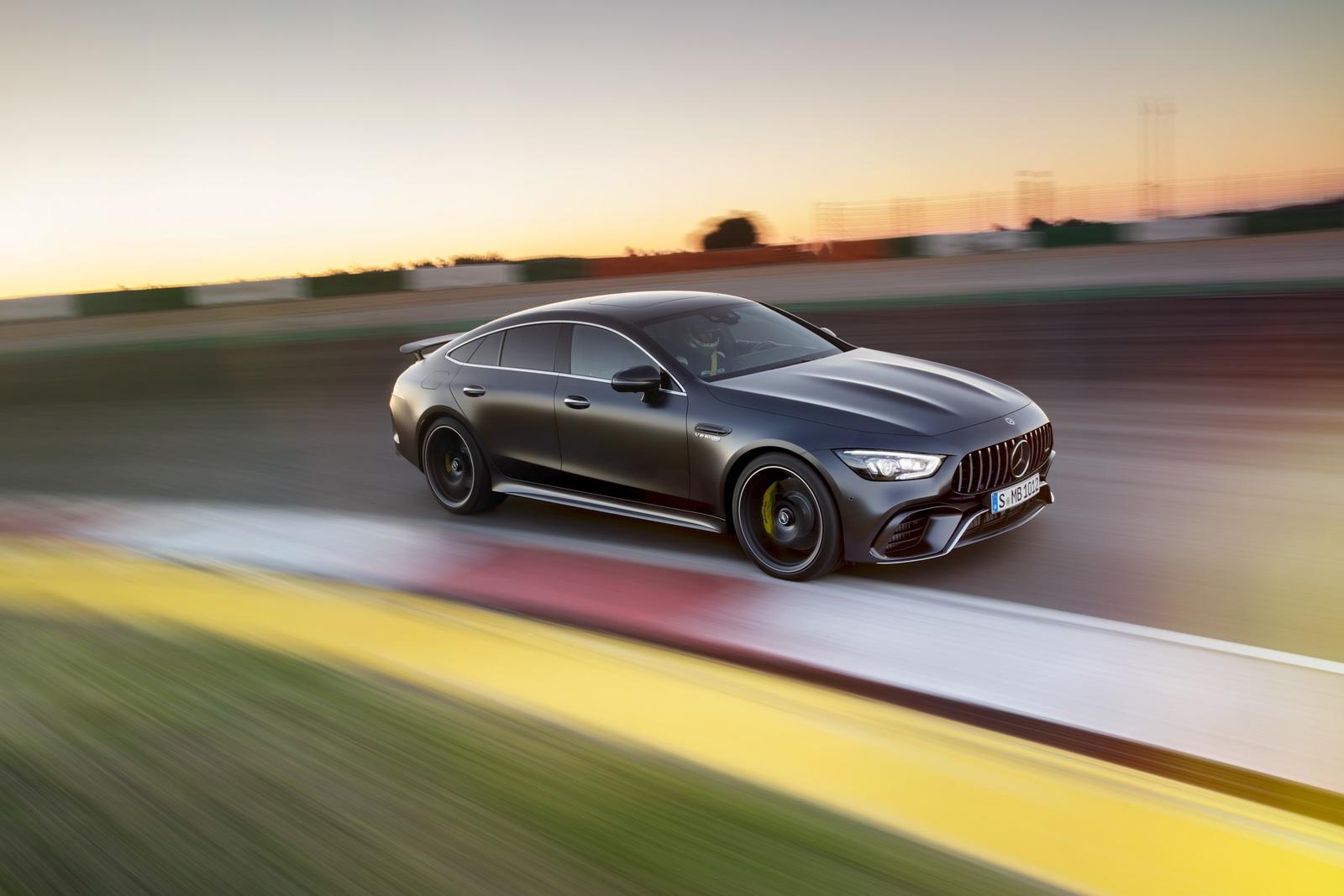 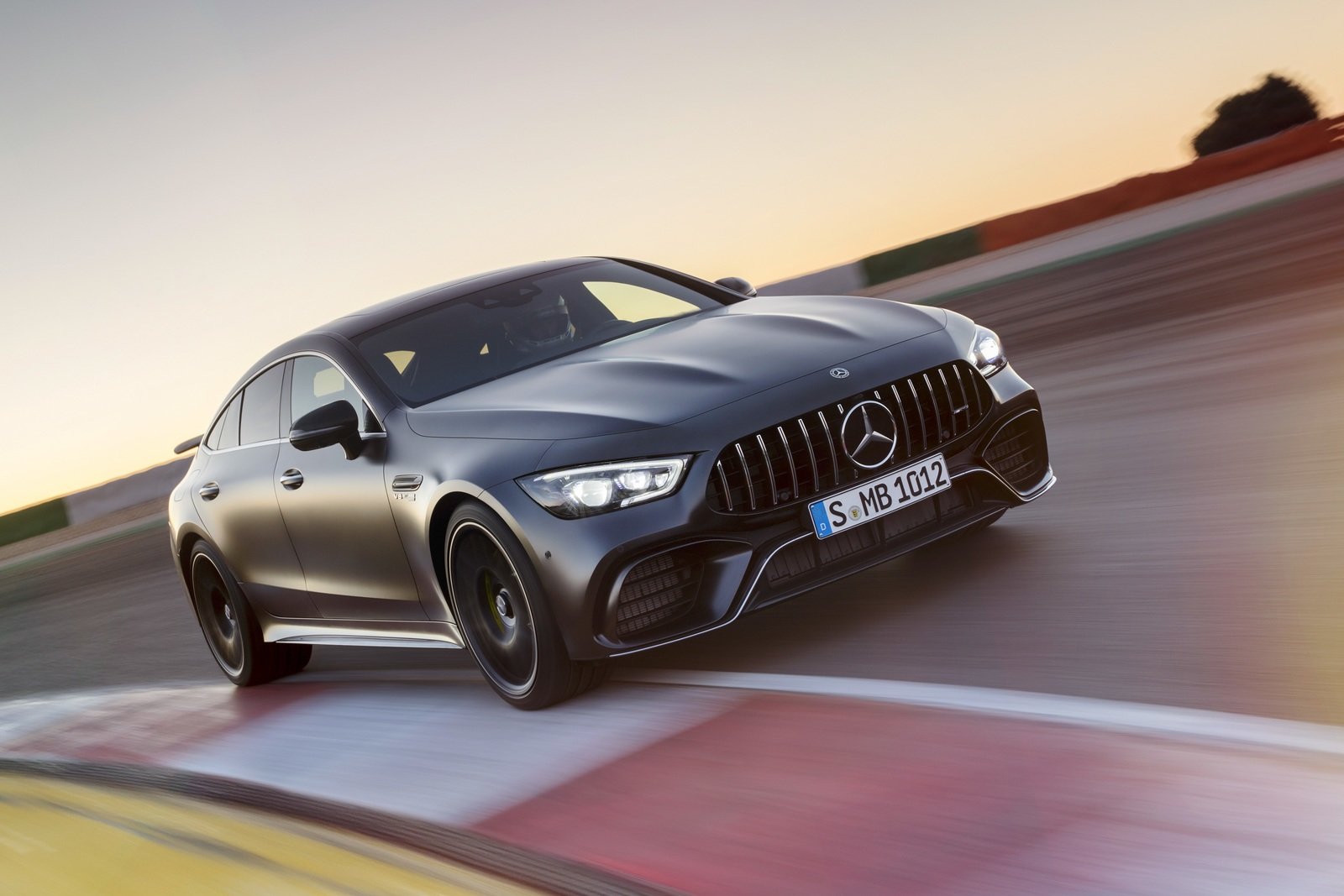 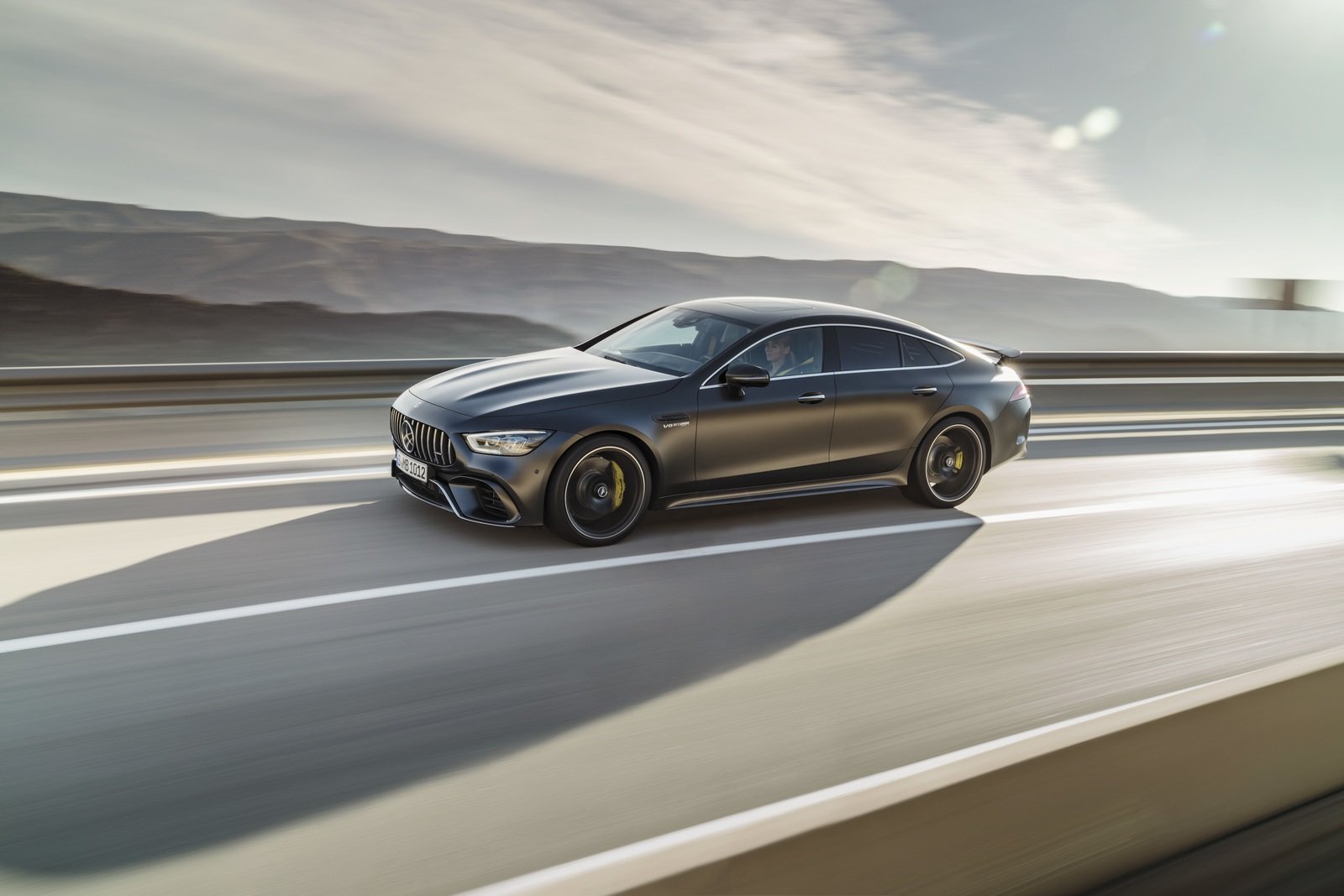 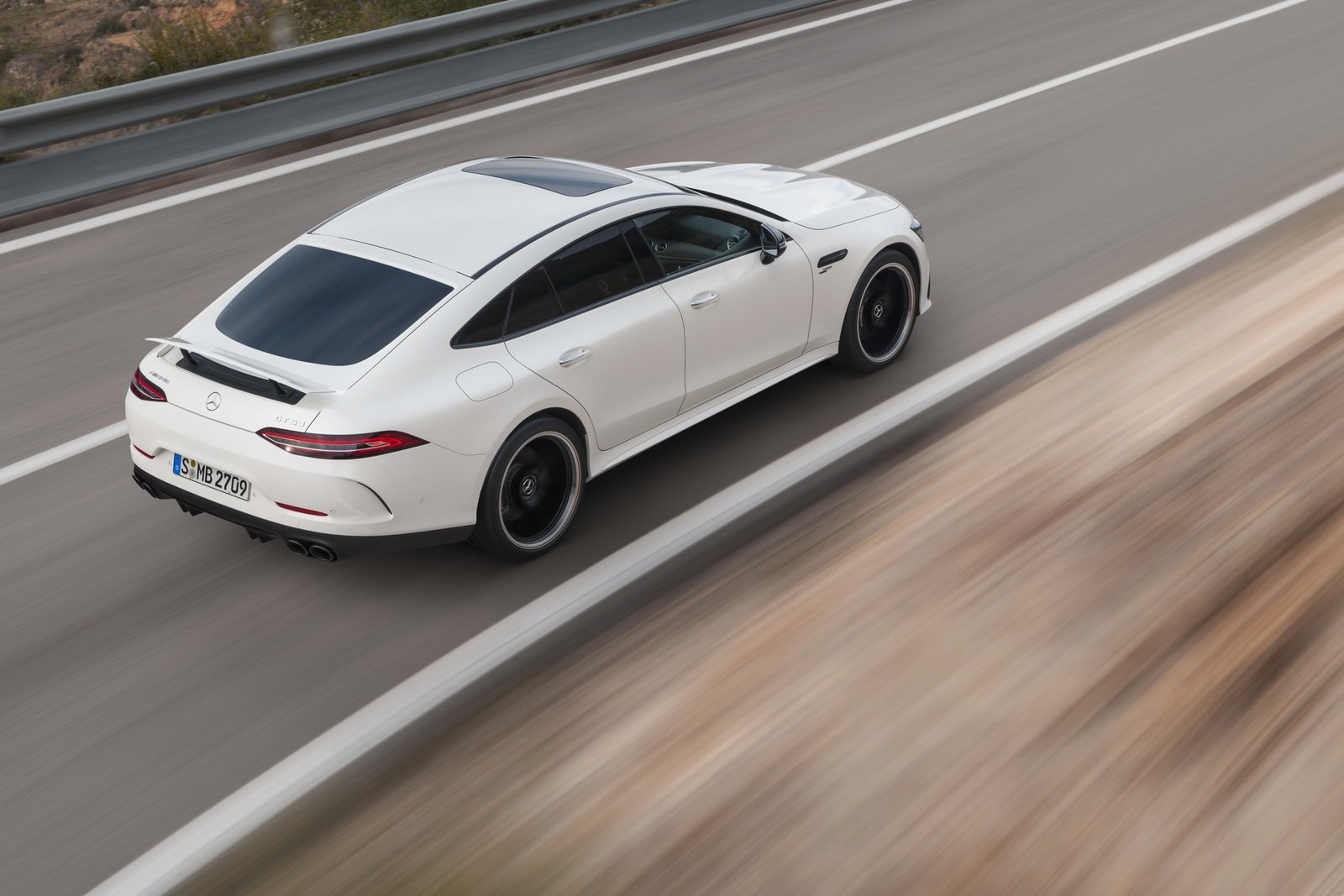 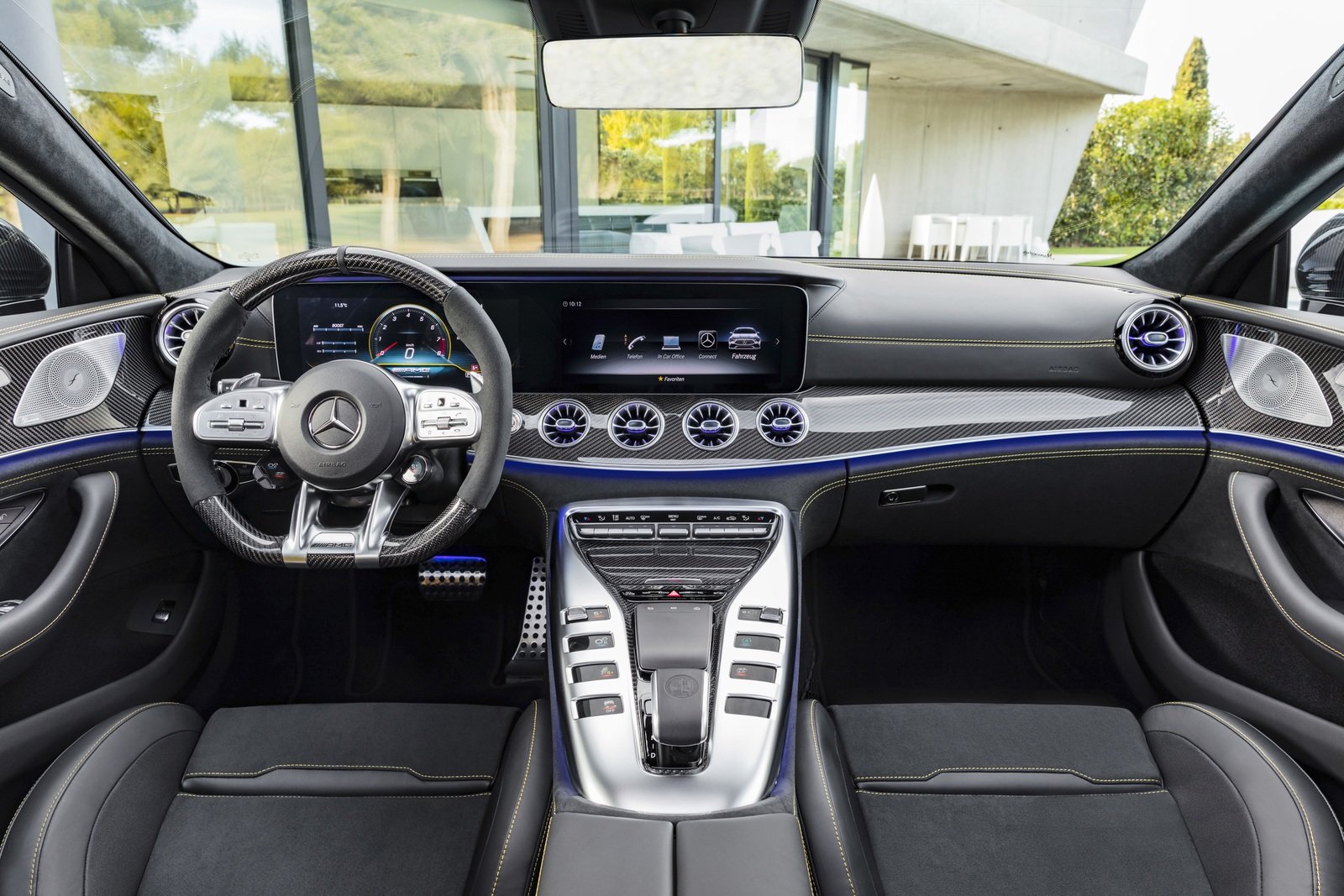 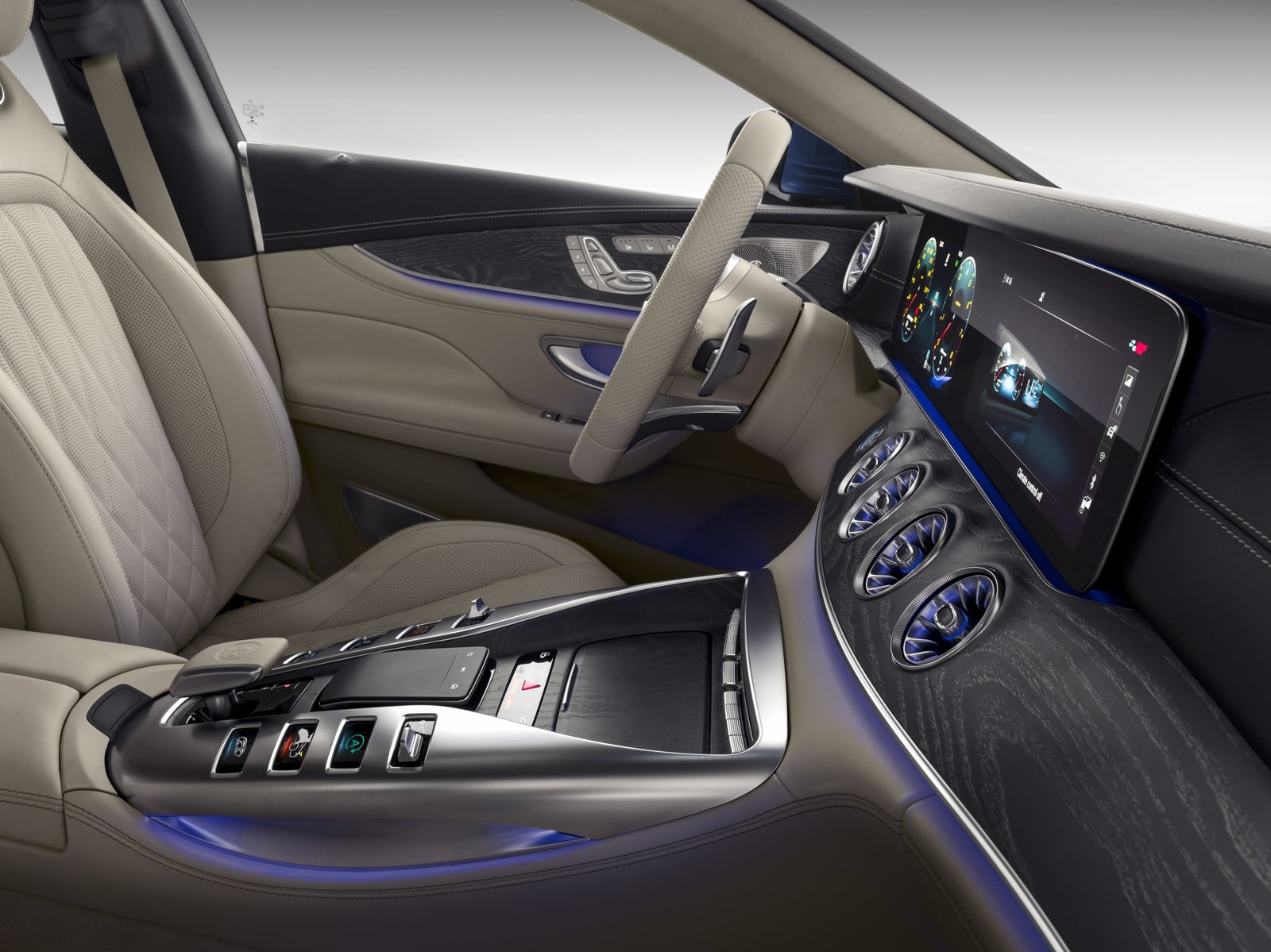 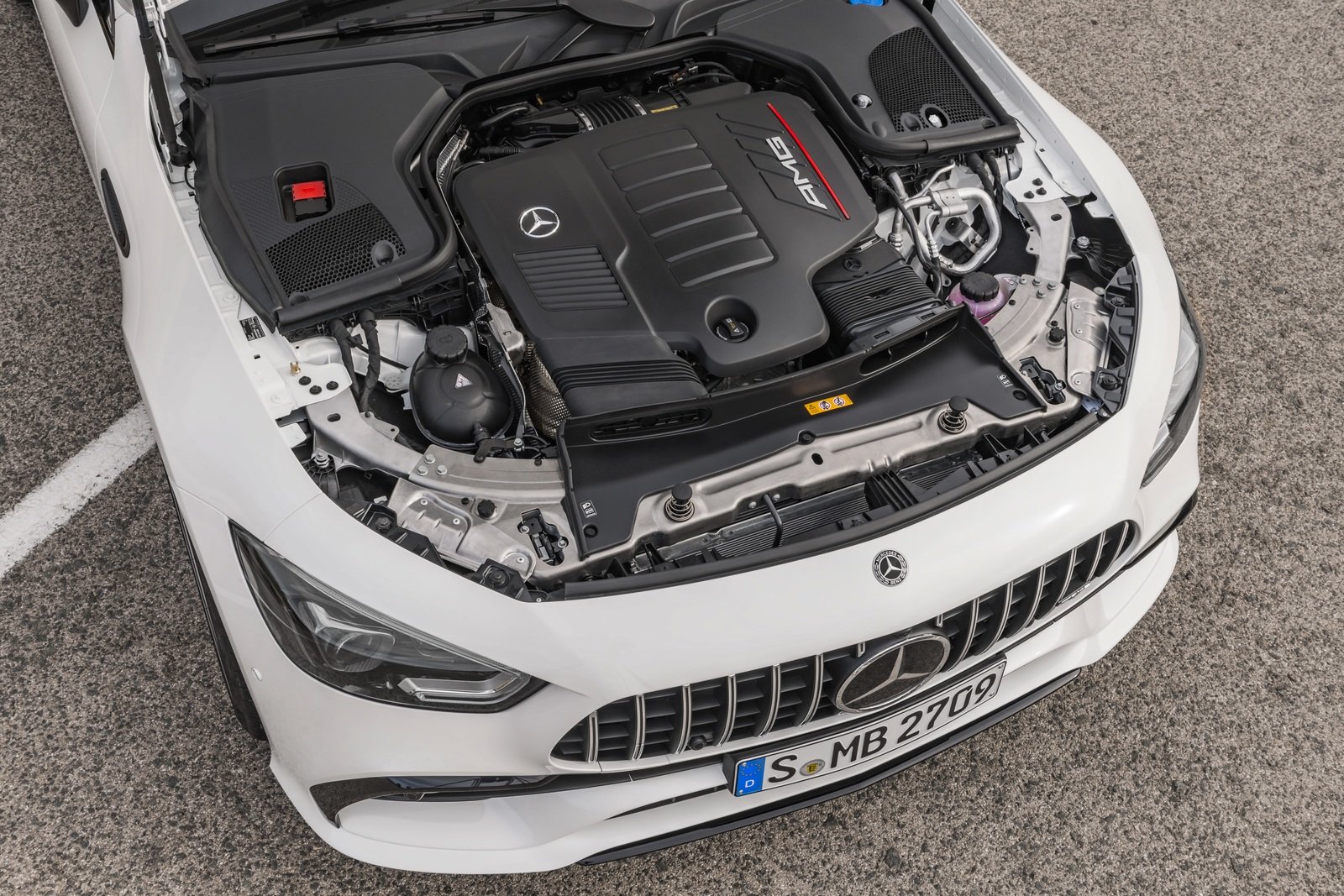 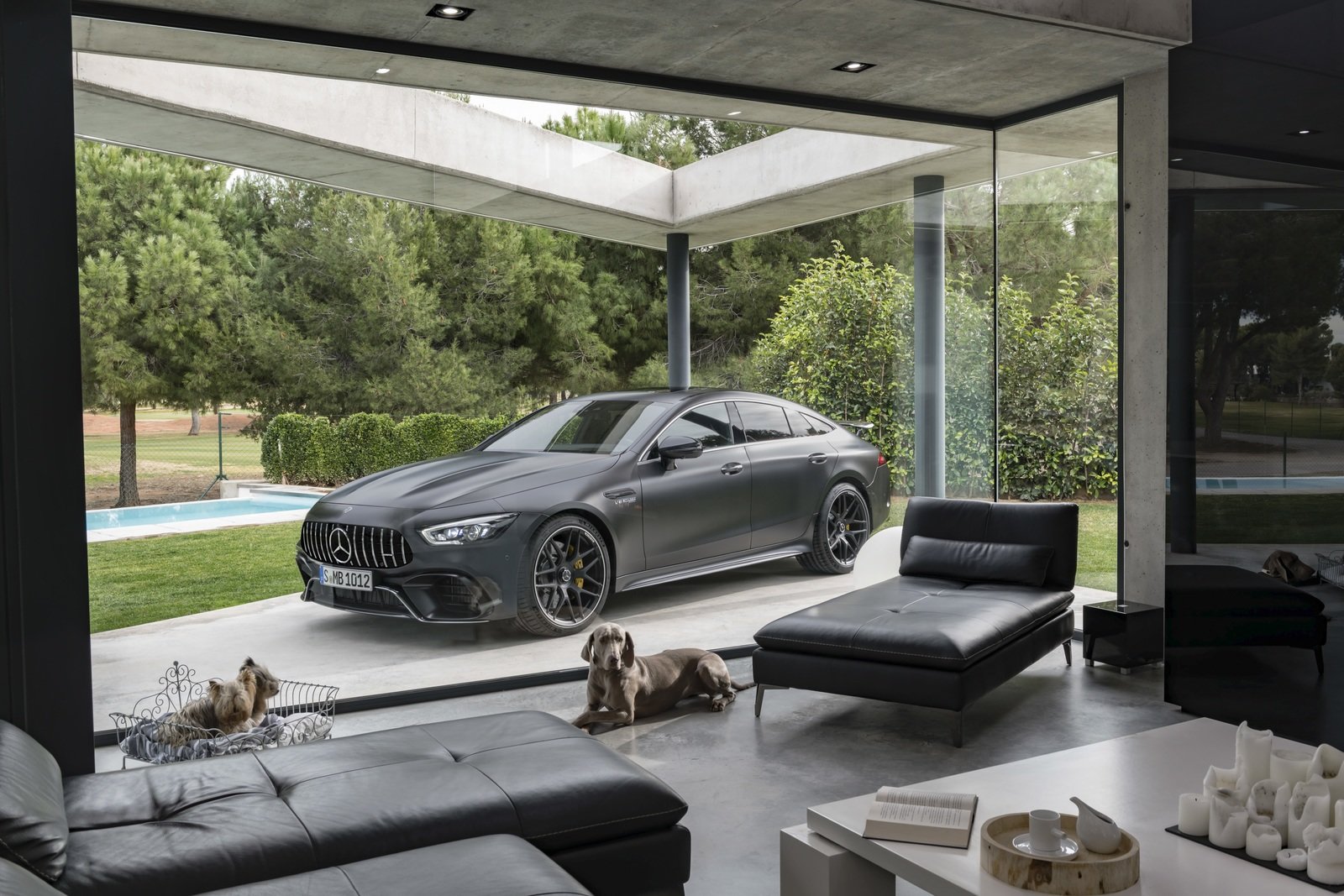 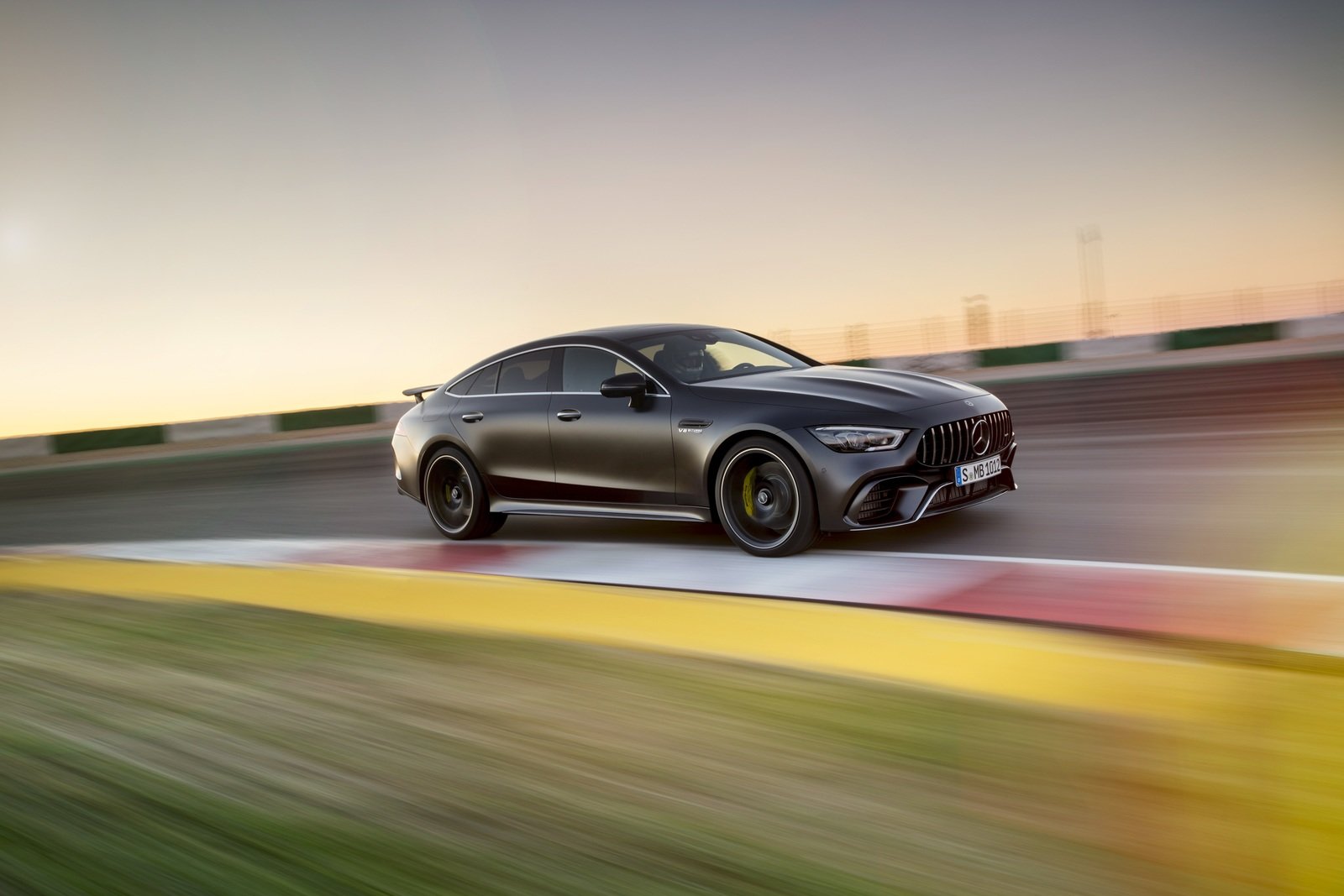 As expected, the cabin of the 2019 Mercedes-Benz AMG GT4 has been redesigned in order to better fit the purpose of the car. It now features a multi-functional steering wheel, and a fully modular instrument cluster. 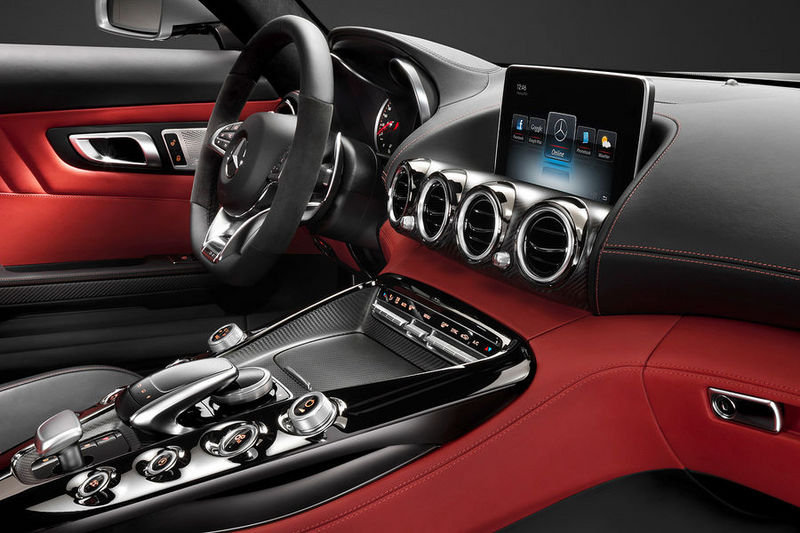 There are quite a few buttons and switches on board too but all the regular instruments are now gone, there is just one carbon fiber seat in place while the one on the right has been replaced with a fire extinguishing system. Mercedes did these changes in order to allow the car to comply with all the regulations without any modifications.

The car features the same 4.0 liter twin-turbocharged V8 as the regular AMG GT. This means it doesn’t really make much more power or torque but that’s not the point of this engine. Instead, AMG worked tremendously in order to make it as reliable as possible. They stripped away all the plastic and added quite a bit of heat dissipation material in order to keep the engine cool during a race. The regular gearbox is also gone. 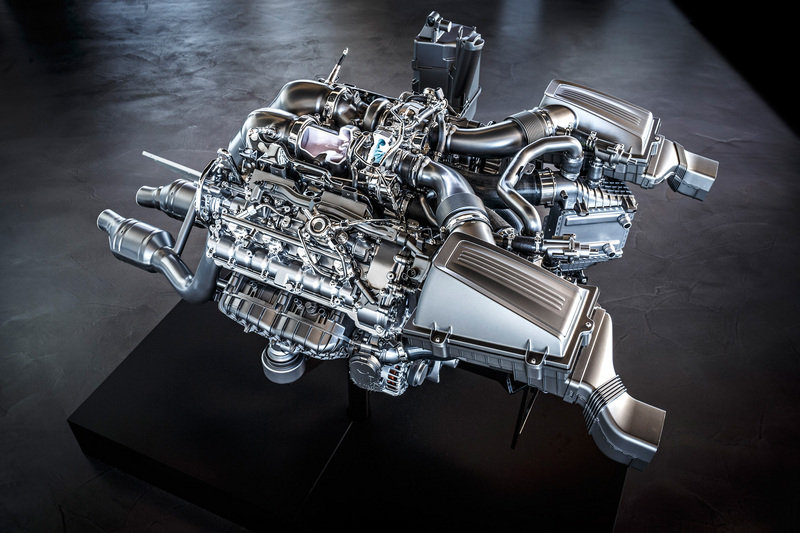 In its place AMG installed a sequential gearbox which is not only faster but it also features its own cooling system. They didn’t say much about the performance but the car should be roughly on par with the street version, at least in a straight line. The big difference will come in the corners where the GT4 will benefit from an increase of downforce. As stated above, the car also features a different traction control system which lets the driver make use of more of the car’s power without sacrificing anything.