After American buyer’s appetites for seriously off-road capable mid-size SUVs saw substantial growth over recent years, any novelty is a big deal. Why? Because at this moment you can only go for $24k Wrangler, $34.5k 4Runner or much pricier but posher Lexus’s GX ($52k). That is if you are not willing to forgive monocoque underpinnings, heftier price tags and somewhat softer (but still capable) nature of other offers. If you are willing, then cast an eye over $46k Grand Cherokee Trailhawk version (with checked Quadra-Trac II option’s box, meaning you’re a getting yourself V8 Hemi too, hooray!) or latest Discovery necessary to arrive in $67.5k HSE Luxury form in order to get you desirable off-road goodies. Anyway, the biggest icon of dirty adventures has just arrived in brand new shape. That’s right 2018 Jeep Wrangler is here! Yet, not quite here. Yet…

Ok, I will. First, we had spy shots depicting new Wrangler which was so meticulously covered that nothing was pretty much visible. Later we had shots of it being barely masked revealing almost everything that was new about itself. And as we all wait for December this year and LA Auto Show to finally grasp the whole picture, Jeep suddenly used SEMA to officially reveal a couple of photos and bunch of accessory parts for it.

Yet, no official word on specs or anything else emerged, so the 2018 Jeep Wrangler is indeed here, but not entirely so. But, don’t worry as lots of technical details leaked about in the past, so we will patch up this story somehow to your delight.

Let’s first deal with the certainty and that would be visual side of it. As you might expect new Wrangler is not that much new as far as its appearance goes. Icons are not to be messed with, Jeep knows that, and new one adds just enough flash to arouse your interest, yet doesn’t hurt a bit its styling heritage.

So, LED lights front and rear, daytime lights sitting on front fenders alongside reshaped turn signals, slightly tweaked bumpers, longer grille slats, bumped hood and more curvaceously shaped fascia are changes that are on the menu. That sounds little, but it will be well enough to create a feeling of freshness when seen in person and do believe us on that.

The new interior is a bit different story. Before, it seems that Jeep never paid much attention to Wrangler’s cabin, resorting to plunging hands into corporate part’s bin and just picking up buttons, knobs, vents, steering wheels… simply gluing them to its dash without much thinking. Not this time as it finally gets a care it deserves. 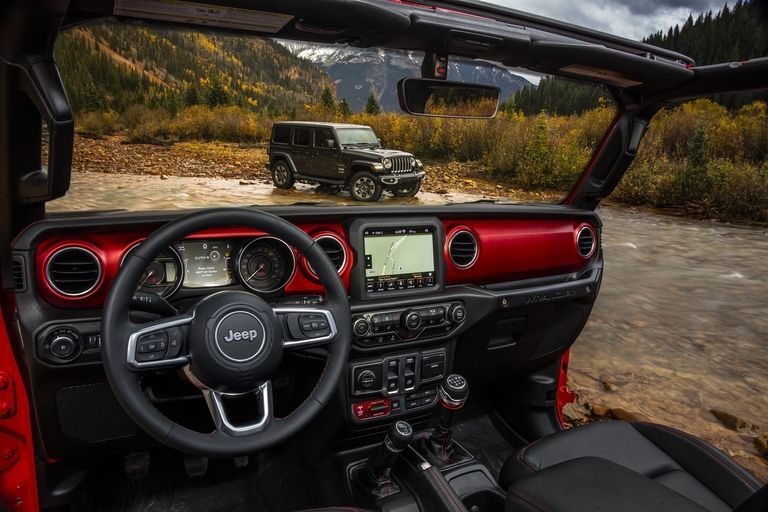 New cabin echoes well conceived retro vibe bursting with rugged charm and for the first time, it complements exterior in a proper manner offering complete package. And finally, there is some uniqueness to it, as the steering wheel, instrument gauges, button and knobs placement and style, tell their own story.

Also, not so lavish side of it is masked by the possibility to paint huge dash veneer in contrast color along with same painted inserts for shift lever (so far pictures depict red one, we’ll see whether it will be more of them).

As we mentioned as far as spec go, we are relying on leaked data due to the FCA quietness. The body on frame architecture with solid axles should remain and as we know, so does naturally aspirated 3.6-liter Pentastar V6. The novelty would be 2.0-liter turbocharged L4 as an entry point, along with 8-speed automatic (replacing 5-speed one), while manual remains.

The big change would be also an introduction of a new type of transfer case, besides the usual part-time 4WD one with low range gearing, which should feature full-time Auto AWD mode capable of being used with higher speeds giving that it powers just front wheels, while engaging rear ones upon necessary. Expect these words to be probably confirmed after its upcoming official debut on November 29, but for stuff like mild hybrid and diesel versions, along with Scrambler pick up model, we will probably have to wait a bit more.